We’ve just released a new version of PerformanceHub with a new feature you may want to make immediate use of, so please read on..
“New User Statuses”

You know how most employees in PerformanceHub are “Enabled”, but there are also statuses like Leaving, Past Employee and Disabled? Well, we’ve expanded the list and added some new functionality so that you can manage users more effectively.

These were the user statuses that we used to use:

But now, you have these choices:

This is how the new and the old statuses map
(green ones are brand new): 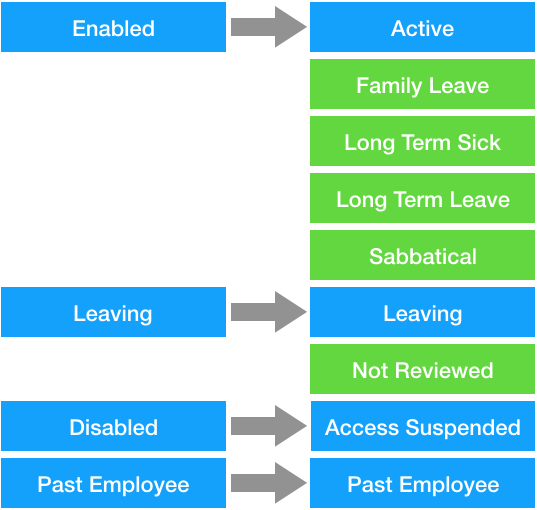 As you can see “Active” is the new “Enabled”. We’ve also changed the name of Disabled to “Access Suspended”. When access has been suspended for a user, then they cannot login and they will receive no email from PerformanceHub (just like the Disabled status used to do) but we figured Access Suspended is a ‘friendlier’ term.

The new statuses help you manage users better and will change the way PerformanceHub behaves.

For users marked with; Family Leave, Long Term Sick, Long Term Leave and Sabbatical, they will not receive PerformanceHub email notifications, and their dashboard won’t list things that they need to do (although there’s a message on the dashboard to let them know why). Actions are also removed from the manager’s dashboard for these users. The idea being that they don’t get pestered while they are away. These users are also removed from various reports, so that you’re not chasing your tails trying to get things closed off.

You almost certainly have employees on maternity leave right now, so why not update their status to “Family Leave” today.

The new “Not Reviewed” status is an interesting one. You would use this if you have a user in PerformanceHub that’s there because they need to review direct reports, but they aren’t going to be reviewed themselves. For some of our customers, we have had some special code in place to mark users as “Fake” to deal with this (yes, I know, it’s a silly name!) but now you would deal with this by marking them as “Not Reviewed”. If you are one of the customers using the “Fake User” workaround, we have automatically switched them to “Not Reviewed”.

So manager’s know the status of their direct reports, when a manager has a direct report with statuses other than Active, we put a little icon next to the direct report’s name, so that the manager knows what the score is.

Finally, a brief word about reporting. When a user has a status that means they are unlikely to be progressing things in PerformanceHub, we remove them from various reports or put them in special pots in reports. This will cut down on a lot of ‘red’ in sunburst reports. We also ‘remember’ the status at the end of the review period, so appraisal reports reflect the status of the employee at the time of the review rather than whatever it is now. This brings me to the very last thing (honest) – we have added a new feature when ‘force closing’ appraisals. You can now attach the employee’s status to the appraisal so that reports are more accurate. For instance, if you force close an appraisal because someone is on maternity leave and it is unlikely to get completed, you can tell PerformanceHub this.

Other changes in this release: